Unmanned Vehicles are any vehicle managed without a crew. There is a wide variety of vehicles, which can be grouped by the environment in which they move (air, land, sea, submarine or aerospace) and by their degree of autonomy (remotely controlled, assisted and autonomous).

These are vehicles managed remotely by humans with different degrees of system assistance. Initially developed for Presently Unmanned Vehicles have a broad adoption for specific uses which include different kinds of ground, submarine, aero spatial and air vehicles. Currently unmanned Vehicles are used not only for combat and entertainment, but also for monitoring, control and delivery of small packages.

The latest advancements in IoT, AI and Robotics are being integrated to unmanned vehicles, providing them with more autonomy and capabilities, such as analysing and communicating with their environment, and conducting an increasing amount of driving tasks without human intervention.

Vehicles equipped with IoT use their sensors and actuators to analyse distance, speed, other objects and vehicles, height, position, etc. and communicate with their environment,

AI proposes and adjusts the trajectories and allows the robotics components of the vehicle to physically act on their environment. Most of the existing AI-guided vehicles are semi-autonomous, with assistance, supervision and partial human operation for highly complex situations.

AI Integrated with IoT and Robotics Integrated IoT, is already able to control Fully Autonomous Vehicles. Fully operational and cost-effective autonomous vehicles are already deployed for highly specialized uses, particularly in storage and cargo functions. The companies and organizations that have broadly deployed them, have obtained strong functional and economic results and are increasing their deployment.

The main limitation to a widespread adoption is not technology, but the fact that the more autonomous they are, the more disruptive they can be with the rest of manned vehicles and human operations, to the point that it requires administrative regulation and, in the air and land case, new control systems and substantial modifications of the public infrastructure. 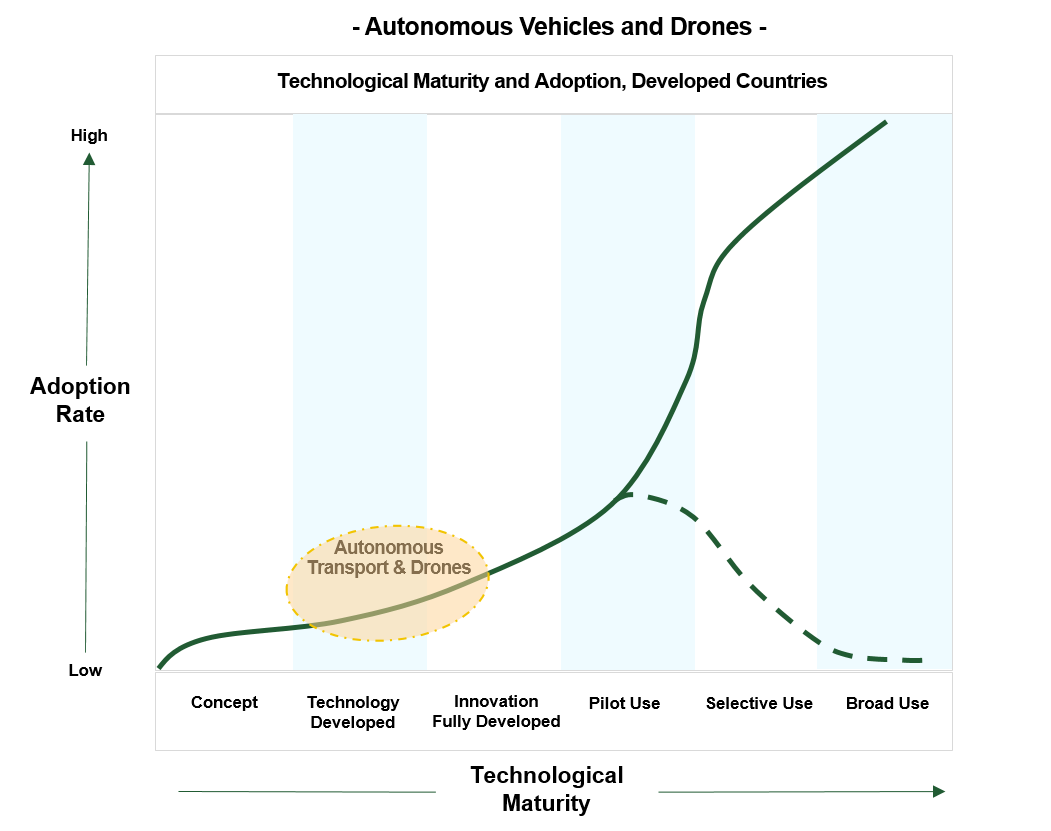 Regulatory and infrastructural barriers range enormously depending on the environment in which autonomous vehicles travel. For sea and undersea vehicles there are few adoption barriers, for air vehicles the barriers are large as they require adjustments on airspace control. In the case of autonomous land vehicles, the infrastructural requirements to allow their joint use with piloted vehicles is enormous.

Indeed, it is this need for regulation and infrastructure that is limiting its current wider use by most sectors. For this reason, the current use and in the next 7 to 10 years, of vehicles guided by AI, both in the present and in the near future, focuses on semi-autonomous assisted vehicles.

The area with potential major economic and social impact are Autonomous Trucks, which are still technologically immature. On the other hand, semi-autonomous truck driving keeps advancing and already experimenting with truck platooning with a single driver in the leading truck, which is expected to be technologically ready in 2 to 5 years. Fully Autonomous platooning trucks unmanned for straight highway driving is expected to be mature in 5 to 7 years, while full elimination of on-truck drivers is expected to require 7 to 10 years. (1)

Autonomous Trucks are a still immature, but potentially disruptive application. We recommend to operators, corporations and administrations in Transport and Logistics to keep appraised of AT’s future evolution and advancements.

Unlike Autonomous Trucks and Autonomous Cars, Drones are more technologically mature, available and on their way to broader deployment. Drones range from remotely controlled, to those that can fly autonomously through software-controlled fight plans and IoT embedded sensors. Despite this, the vast majority of drones in productive operation are semi-autonomous due to regulatory issues.

Commercial scale Drone Freight Transport is expected to be technologically mature in 5 to 7 years and passenger one in 7 to 12 years (2) (3). Drones are expected to generate a large economic impact, as an illustration, the estimated annual impact on the GDP of the USA is $31 billion to $46 billion annually by 2026. (3)

Despite all these estimations, regulatory and infrastructural barriers, plus the need for population’s acceptance make their adoption and massive use unfeasible in at least for a decade. We suggest that, considering the disruptive and value creation potential of Autonomous Vehicles, that administrations and operators keep appraised of their evolution and start experimenting with already proven and limited specialized functions.

In Developing Countries, Drones are ready to generate significant value in many areas, for example in infrastructure surveillance in isolated regions, and mining and agricultural management including planting and fertilization.

Regarding Transport Drones, they can bridge and leapfrog the transport infrastructure gap and provide transport of high-social value items, like medical equipment and vaccines, at high speed and lower costs in areas with limited or even non-existent roads. They also allow for the rethinking of future transport infrastructure planning and construction, focusing the investments on main roads and railways and leaving last mile transport to Drones.

Autonomous Vehicles and drones have evolved enormously with the integration of AI, Robotics and multiple sensors and actuators equipped with Internet-of-Things. Autonomous Vehicles are already used in a variety of functions with effects in transport and logistics.

Improved Traffic Fluidity and Congestion Reduction: autonomous Vehicles and Drones, because of their initially minor carrying capacity, and lower cost per unit, will result in a net increase in the number of vehicles per fleet and the complexity of its management will invariably require the use of Artificial Intelligence allowing for a better adjustment in demand-supply and planning, and reducing infrastructure congestion.

On the other hand, and due to the large volume of vehicles, it is likely that routes will have to be planned and with approved slots, as is currently the case in air transport. In later stages, control centre authorities may need to be set up to streamline and control traffic, as well as resolving potential conflicts of interest.

Decrease in Personnel Directly Involved in Operations: This technology has a clear effect on the activities required from its future operators, more oriented towards control, maintenance and optimization and problem management. The staff, not being physically involved in the operation, will be able to enjoy a less difficult or risky environment. Hourly limitations, due to agreements and employment contracts or tachograph restrictions, will be modified in a first phase.

Increased Remote Surveillance and security in large infrastructures like terminals, ports, and airports.

Operations Optimisation and New Services: Autonomous Vehicles offer to operator’s potential significant savings in operational resources, resources that can be redistributed to perform other tasks within the service or additional services. Examples include capillarity increase of the transportation system with last mile services by unmanned vehicles. Autonomous Vehicles will also allow for the definitive deployment of transport on demand.

Greater Travel Safety: when traveling by automated driving, for both users and staff, who will be able to steer travellers remotely if required.

Realignment of Labour and Skills: The redistribution of the human resources of the operating company (by reducing the need to have driving staff) can be a very important opportunity for improvement in the direct contact with the customer, for example, customer service agents on board.

Improved Remote Surveillance and Incident Response: similarly, to Freight Transport, drones facilitate surveillance of installations and critical infrastructure. Additionally, drones allow near to immediate response to incidents and service problems, as well as significant efficiency and effective gain in inspection and maintenance tasks.