Shipping in the Mediterranean

Port and shipping services handle more than 80% of global trade volumes, and this share is even higher for most developing countries. Despite the growing eCommerce – in fact invigorated by it – the physical movement of goods across oceans remains at the core of trade driven development. To participate in global value chains, Mediterranean countries depend on well-connected ports and cost-effective shipping services.

Beyond being users of port and shipping services, Mediterranean countries also generate some income by providing services and hosting maritime businesses themselves. Some countries of the region are important players in ship owning, registration, and transshipment services.

In recent years, the issue of climate change as emerged as major challenge to those who use and provide maritime transport services. Mediterranean countries need to adapt to the impacts of climate change, including rising sea levels and more frequent extreme weather events that affect ports. As the industry moves towards decarbonization, Mediterranean countries also need to assess and mitigate the potential effects that decarbonization measures may have on transport costs and connectivity.

In order to help countries, assess options for their maritime policies, this article looks at the maritime profiles, port performance, and shipping connectivity of 12 countries in Southern Europe and Northern Africa.

In terms of their maritime transport connectivity, the twelve countries covered in the present article can be arranged into three groups.

UNCTAD publishes a quarterly Liner Shipping Connectivity Index (LSCI) on the country– and port-levels. The index is generated in collaboration and with data from MDS Transmodal on the deployment of container ships. The underlying six components include hard data on the number of ships, their container carrying capacity in TEU (Twenty foot Equivalent Units), their size, the number of companies the number of services, and the number of countries or ports that can be reached without transshipment. The index provides a useful indication of each country’s and each port’s position in the global liner shipping network. 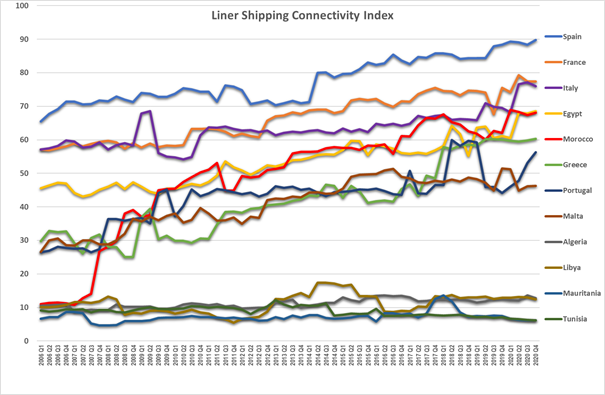 UNCTAD, based on data provided by MDS Transmodal.
Data for all countries is available under http://stats.unctad.org/maritime

The best-connected country in the Mediterranean is Spain, followed by France and Italy. The three countries benefit from both, their geographical location and their domestic markets and hinterlands. Algeria, Libya, Mauritania, and Tunisia, on the other hand, have very low liner shipping connectivity. Their LSCI has not increased since 2006. Morocco initially had the same low connectivity as Algeria, Libya, Mauritania, and Tunisia, but thanks to the private sector investment in Tanger Med now counts on a state-of-the art transhipment hub and has the fifth highest LSCI of the region.

UNCTAD, based on data provided by MDS Transmodal.
Data for all countries is available under http://stats.unctad.org/maritime

Thanks to Automatic Identification System (AIS) data, provided by MarineTraffic, we have detailed information about how many ships and what type of ships call in each country’s ports. Annual and semi-annual reports about port calls and the time spent in port are available on UNCTAD-stat. The same data set also allows us to see the median time ships spent in port, as well as their average age and the average and maximum cargo carrying capacity. Next table provides two illustrative examples.

The highest total number of ship calls in 2019 among the 12 countries covered in this article were recorded in Italy, with 233 081 arrivals, followed by Greece (159 583) and Spain (142 773). Most of the ship calls in these three countries were passenger ships, including ferries and cruise ships.

The lowest number of vessel calls were recorded in Mauritania (806), Libya (2 772), Tunisia (4 068) and Algeria (6 188). In these Northern African countries, a high share of the vessel calls are general cargo dry break bulk carriers. These ships are used for all types of cargo; they are used more often when cargo volumes are low and there is less incentive to deploy more specialized ships. Liquid bulk carriers are the most important vessel type only in Libya. 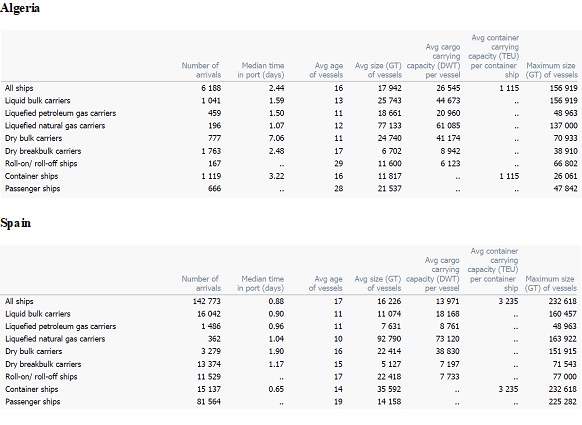 Vessel arrivals and time spent in port, 2019. Examples of Algeria and Spain

UNCTAD, based on data provided by  MarineTraffic.
Data for all countries is available under http://stats.unctad.org/maritime

Everything else equal, it should actually be expected that time in port would be longer in those countries with more container traffic, given that each ship has to load and unload more containers. However, there is also a causality going in the opposite direction: More efficient ports are more attractive for shippers and carriers and, thus, shorter time in port is a positive indicator of a port’s efficiency and trade competitiveness.

With limited gateway cargo, there are fewer outside trucks causing congestion in the yards, and with cargo arriving and departing in large batches, potentially planned days ahead, transhipment ports have some fundamental advantages. Last and not least, most are operated by global terminal operators, and many are set-up as cost centres or joint ventures with the ship operators.

On average, 75-85 per cent of port call time of container ships is consumed by container operations, i.e. the time between the first and last container lifts, while the remaining time may be due to pilotage, mooring, possibly Customs formalities and other operational or procedural requirements. There exists a huge spread in average port times, and this should be seen as an opportunity for improvement.

The UNCTAD Maritime Country Profiles show each country’s participation in maritime businesses. Figure 2 provides the example of Morocco. It is interesting to see how some countries are important providers of some shipping segments, notably ship owning (Greece) and ship registration (Malta). However, most countries of the region are predominantly users of maritime transport services (reflected in their share of vessel calls) than providers. 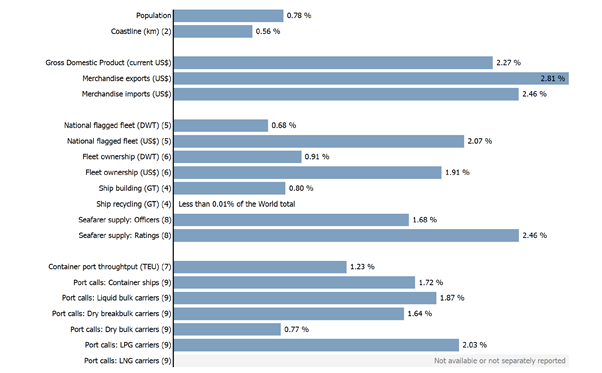 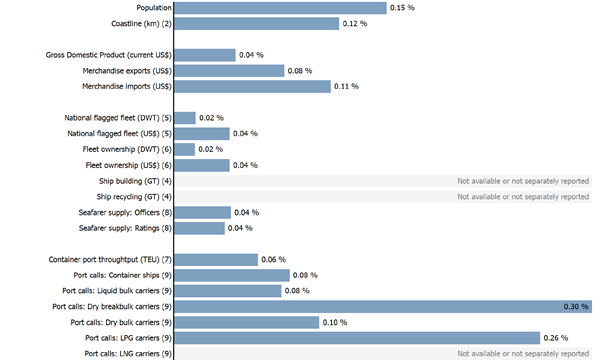 The impact of covid-19

In all countries, during the first semester of 2020, port calls in most vessel types declined significantly. Globally, in 2020, port calls of container shipswere 2.8% lower than in 2019; this sector saw the earliest recovery. Port calls by general cargo ships went down by 7.8%, while calls by dry bulkers and tankers declined by 4.1% and 4.9%, respectively. The highest declines were recorded for Ro/Ro vessels (minus 12.8%) and Passenger ships (minus 18.3%) (Table 3). Thus, cargo carrying ships fared better than ships that carry people. 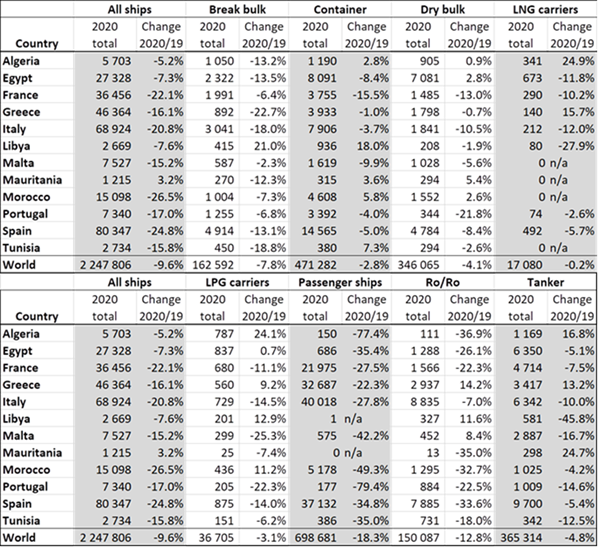 UNCTAD, based on data provided by MarineTraffic.
Note: In this table, only ships of 5000 GT and above are considered.
Additional data is available under http://stats.unctad.org/maritime

Among the 12 countries covered in this chapter, Morocco (-26.5%), Spain (-24.8%), France (-22.1%) and Italy (-20.8%) saw the largest decline in port calls throughout the pandemic. These countries also have a high share of passenger and Ro/Ro traffic, which are the two markets most heavily affected by the pandemic. Mauritania is the only country that recorded an increase in port calls in 2020, albeit starting from the lowest base, and benefitting from growing arrivals of tankers.

The countries in the sub-region are above all users of maritime transport services. They are not ship building countries (most ship building takes place in China, Japan, and Korea), nor – with the exception of Greece – ship owning countries. Only Portugal and Malta have significant ship registries, i.e. foreign-owned ships fly the flag of these countries.

The main interest of the Mediterranean region countries lies in port calls and traffic. And here there are large differences in in the performance, as measured for example in the liner shipping connectivity index and the time ships spend in port.

Building on the UNCTAD Review of Maritime Transport 2020, there are six priority areas for policy action to be taken in response to the COVID-19 pandemic and the persistent challenges facing the maritime transport and trade.

The statistical information included in the article is largely drawn from the UNCTAD on-line statistics, available under http://stats.unctad.org/maritime. The statistics are regularly updated as new information becomes available. The underlying raw data comes from a wide range of national and international sources, including Clarksons Research (https://sin.clarksons.net) for the fleet data, MarineTraffic (https://www.marinetraffic.com) for the port calls and time in port statistics, and MDS Transmodal (https://www.mdst.co.uk) for the container ship fleet deployment liner shipping connectivity indices.

The maritime profiles for 230 economies are available on-line https://unctadstat.unctad.org/CountryProfile/MaritimeProfile/en-GB/012/index.html . They are updated annually.

For further discussion of the performance indicators, country profiles, and the impact of the covid-19 pandemic, see UNCTAD, Review of Maritime Transport 2020, Geneva: http://unctad.org/RMT.