Some Observations on the Impact of Covid-19 on Shipping

The problems created by the Covid pandemic to the carriage and distribution of goods caught everyone including the major container carriers unaware and necessitated the introduction of short term measures in order to safeguard both the coherence of the logistical cycle as well as the financial sustainability of the carriers.  The situation that evolved between March and June saw a plummeting of cargo volumes and an unprecedented situation of port closures (mainly in China) which left the carriers grappling at situations never experienced before and which needed immediate solutions.

The economic downturn in China as a result of the curtailment in manufacturing and exportation had an immediate effect on the amount of cargo available for export from Far East to the rest of the world.  As early as March, the UN had already published a study wherein it estimated that China’s reduced exports cost other countries and their industries over USD 50 billion.  The regions most effected in order of priority were the European Union, the United States, Japan, South Korea, Taiwan and Vietnam.

The recovery in Chinese exports during the summer months was immediately counterbalanced by the drop in demand particularly in Europe as a result of lockdown measures introduced in the various European countries.  Hence the problem shifted from supply to demand but the net result was the same – less seaborne cargo to be carried.

The effect of this situation, particularly in the Mediterranean, reflected itself in a drop of the volume of cargo handled, estimated in the region of 35% to 40% which was mainly caused by the measures taken by the main line carriers to cut down on the number of voyages with the aim of reducing operating costs.

The effect of the blank sailings on container shipping was very well highlighted in the study commissioned by UNCTAD under the heading “Covid 19 and Maritime Transport Impact and Responses”.   The below graph reproduced from this study shows the impact of blank sailings on the port of Marsaxlokk (Freeport) Malta, where the weekly port calls in the first and second quarters of 2020 dropped by 42% and 39% respectively. 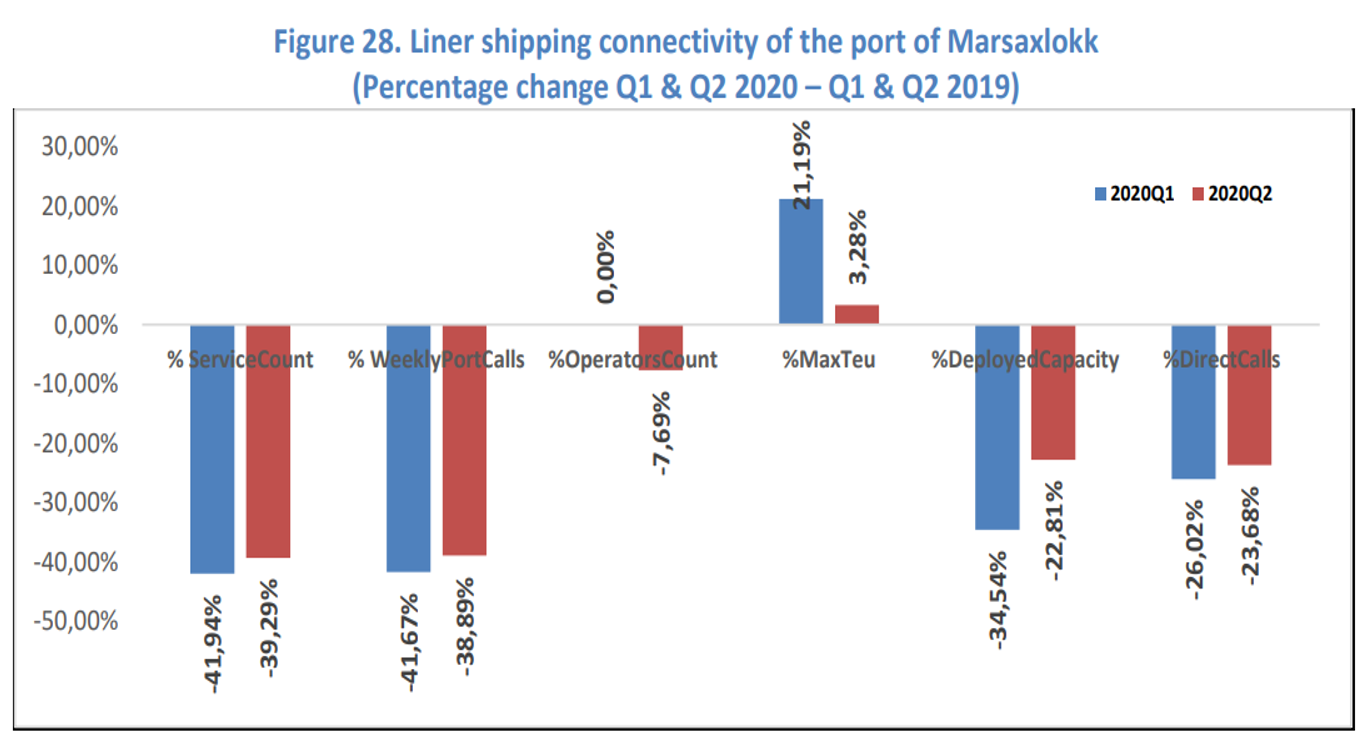 The issue of the blank voyage as an economic tool to stem losses gave the desired results to the carriers who in the meantime started reporting positive results but caused tremendous financial damage to terminals, hauliers and other service providers within the logistical chain.  The application of blank sailings reduced the supply of slots available at a time when exports from the Far East started increasing again and this pushed up freight rates because of the limited space available. According to a report carried in the Lloyd’s List of 5th October, the Asia-Europe freight rates reached a new high which was not experienced in pre-Covid times.  It is definitely to be expected that the container carriers, having learnt to their satisfaction the outcome of a disciplined approach, will do their utmost in future to maintain this mechanism which is the epitome of the economic forces of supply and demand.

The other development which evolved throughout the first half of this year and which is influencing logistics to a substantial degree is the purchasing online on a mass level.  Lockdown conditions, fear of contagion and other measures adopted by governments to reduce social contact, generated a demand for home delivery service and this was extended from the food industry to every imaginable consumer good that was facilitated by ordering online.  This movement of goods created a paradigm shift in the logistics of cargo transport whereby the online service provider in combination with courier services replaced to a certain degree the freight forwarder and the line agent whose task it was to source and book cargoes.  The online service providers found themselves in control of so much volume of cargo that they attracted the attention of the container carriers who had already been viewing them as potential clients.  This development has immense ramifications for the future of logistics not only for the Mediterranean but worldwide because once the consumer gets to grips with the convenience of ordering and paying online with guaranteed delivery within a short period of time, it will be difficult to dissuade the consumer from such a system and revert to systems which entailed employment of more time to source and secure delivery of goods.

Particularly within the Mediterranean these developments can translate themselves into more shortsea intra-European services.  This development brought even more to the fore the concept of intermodalism as a logistical pipeline to channel cargo between producer and consumer.  One is to expect cargo to move on fast means of transport such as trains which link to ports that in turn facilitate services for shortsea fast ferry vessels.

The transport by sea throughout the whole journey, especially on a regional level, will be seriously challenged by intermodal solutions whereby the sea plays a part and not the whole logistics cycle.  Such a scenario however will bring back to the European discussion table the existing bottlenecks that hinder or obstacle the fast movement of cargoes especially through ports.  The lack of the single window and an effective customs union that can do away with customs barriers, will hinder the development of this intermodal solution because the logistics process gets bogged down with bureaucracy and inefficiencies.  Were this development to take its natural course, intra-European traffic will flourish because of:

These developments necessitate a functioning infrastructure which involves ports, terminals, vessels, crew, forwarders, customs and receiver.  These represent links in the supply chain and it goes without saying that the malfunction of one link jeopardises the strength and coherence of the whole chain.  Post Covid has to ensure that appropriate protocols are in place to facilitate the proper functioning of each link.  It is only through such an approach that we can look back at this period and feel that lessons have been learnt to sustain impacts of epidemics in future.

COVID-19, an opportunity for African airports to embrace technology and inn...
Scroll to top