Transport is essential to life and of vital importance for society, ensuring everyday mobility of populations and allowing them to perform their economic and social activities. Transport is also pivotal for growth and competitiveness of economies enabling economic activities, the production and distribution of goods as well as trade. International transport is of strategic importance playing a vital role to international trade, which has a major impact on the economic development. On the other hand, transport negatively affects people’s safety and health as well as the environment.

This article, dedicated to road transport, draws on the experiences from the ongoing work under the European Union (EU) funded EuroMed TSP (2017-2022) and previously the EuroMed Road, Rail and Urban Transport (RRU) Project (2012-2016) (hereafter called EuroMed Projects), highlights the importance of the regulatory convergence in the EuroMed region, being one of the two major components of the Regional Transport Action Plan (RTAP) for the Mediterranean (2014-2020), along with the establishment of the future Trans-Mediterranean Transport Network (TMN-T). It also presents the selected regulatory frameworks developed under the United Nations (UN) and European Union (EU) auspices that were promoted in the region and describes the EuroMed partner country efforts and achievements.

Transport is a strategic responsibility of Governments, promoting its efficiency, through the development of transport networks and a regulatory framework within which transport services can develop efficiently

Roads are by far the most common transport mode for both passenger and inland freight transport, being extremely cost-efficient. However, in order for the cross-border transport by road to perform efficiently, there is a need for internationally harmonized standards and regulations. Heterogeneous transport regulations that vary from one country to another are real barriers to international transport and trade.

For more than six decades, UNECE provides a platform for intergovernmental cooperation to facilitate and develop international transport, while improving its safety and environmental performance. The results are reﬂected in 58 international legal instruments. These instruments, supplemented by EU legislation, represent the best European and international practices. By applying them, EuroMed partners may only benefit, since they are effective tools not only for the facilitation and development of international transport, but also for upgrading the performance of their national inland transport systems.

At its Action 8 (Efficient Land Transport Systems) and 9 (International Land Transport Haulage), the RTAP 2014-2020, inter alia, advocates for a regulatory convergence promoting cross-border transport and international haulage in the region and encourages EuroMed countries to accede and effectively implement the main UN road transport agreements and conventions. Moreover, RTAP Action 8 calls partner countries to pursue efforts for improving the efficiency of the road transport sector, and addressing the professionalism of drivers, of operators, the technical state of the vehicle fleet and road safety. RTAP Action 9 also makes particular reference to the AETR, ADR, ATP, TIR Convention, Harmonization Convention, the 1958 and 1997 Agreements and describes the benefits of Mediterranean partners by becoming contracting parties to them, while RTAP Action 10 (Road Safety) encourages countries addressing the technical inspections of certain types of vehicles and the minimum standards towards which the vehicles are to be tested.

In addition to the above, that also make part of the EU road transport regulations, the following four (4) EU legal frameworks addressing the professionalism of drivers and operators as well as the technical inspections of vehicles, were selected for promotion amongst EuroMed partners.

Technical condition of vehicles and inspection

Harmonization of national legislation in the region along the said regal frameworks, is rigorously promoted through regional and national workshops, seminars and technical assistance missions organized by EuroMed Projects in all partner countries. Study tours were held under EuroMed Projects, in Geneva, Switzerland and Haute Savoie, France and in Padua-Vicenza-Venice area, Italy. Roadmaps on accession and implementation of AETR, ATP and 1958 and 1997 Agreements were elaborated and published in cooperation with UNECE. High-level participation of EuroMed officials in the work of selected UNECE intergovernmental bodies in Geneva, were encouraged and facilitated. National strategies were elaborated and or reviewed with EuroMed Projects support, aimed at promoting accession to and effective implementation of UN Agreements along with studies, analytical work, economic impact assessments, and pilot actions.

These efforts raised awareness amongst EuroMed partners on the vital importance of the UN Agreements and respective EU legislation and helped them familiarize with the relevant work of UNECE and EU. National legislations have been modified in almost all EuroMed partners, inspired by those UN Agreements and EU best practices, while accession and implementation to these agreements is ongoing. The accession of Palestine to the TIR Convention, in 2017 and to the Road Traffic Convention, in 2019 as well as that of Tunisia to the 1997 Agreement, in 2020, are among the concrete achievements, while Egypt’s accession to the TIR Convention is forthcoming. Moreover, EuroMed partner efforts led to the opening of AETR to Algeria, Jordan, Lebanon, Morocco, and Tunisia, while soon AETR will be opened also to Egypt.

Concerted efforts are also pursued in the region for enhancing professionalism of drivers and operators as well as technical state of vehicle fleet. Mandatory training for professional drivers of certain road vehicles categories inspired by Directive 2003/59/EC is pursued already by some EuroMed partners and their drivers safety performance is being improved by respecting driving and rest times rules following the AETR Agreement. Rules for the access to the profession of transport operator inspired by Regulation 1071/2009/EC are applied in several EuroMed countries and same is valid the transport of dangerous goods. The technical state of the vehicle circulating in the region has been drastically improved through the application of some of the Regulations annexed to the UN 1958 and 1997 Agreements and EU best practice, including elements of Directives 2014/45/EU and 2014/47/EU.

EuroMed Projects have been instrumental in assisting partner countries, harmonize their transport regulations and enhance the performance of transport operations in the region in support of the implementation of the regulatory aspects of the RTAP 2014 – 2020. However, in spite the efforts, as seen in the following table, accession to the selected UN road transport legal instruments is still not well advanced. Lack of Human recourses at the concerned Ministries and lack or limited cross-border road freight transport operations reducing the urgency of the need for harmonisation, are among the problems facing EuroMed countries with regard to their accession to these legal instruments. The Covid-19 pandemic has also negatively affected this process. 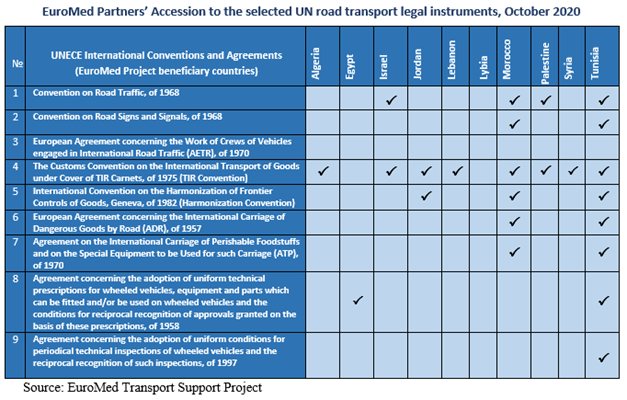 The high importance of the regulatory convergence in promoting cross-border transport and international haulage and upgrading road transport performance in South Mediterranean region, has become apparent to EuroMed partner countries. However, while the focus of the efforts was towards road haulage, which holds the largest share of the overall freight land transport movements, the cross-border road freight transport in the South Mediterranean region remains rather limited, due to subregional conflicts and security concerns.

While EuroMed partners have made substantive progress in the past years, a lot of efforts are still required. Regulatory reform and convergence of transport legislation, development of harmonized transport rules and standards, higher professionalism for drivers and operators and improved technical state of the vehicle fleets, should remain the highest priority in the region, since they are considered prerequisites for the development of efficient land transport systems for the promotion of cross-border transport and international haulage. Accompanied with National Strategies, including on Road Safety, Intelligent Transport Systems (ITS) and Digitalization of Transport, will lead to enhanced operations and management of transport systems, reduced congestion and GHG emissions and improved network efficiency.

Moreover, existing national inland transport strategies should be reviewed and whenever not in place elaborated. Such strategies should define national regulatory approaches for improving the road transport system, facilitating cross-border transport and international haulage, and improving road safety, for which accession and full implementation of the said UN legal instruments is essential. Strategies should also address climate change with all its adverse effects, being the biggest social and environmental challenges before the global economy, taking note that transport is responsible for 27% of total EU-28 Greenhouse Gas emissions, 72% of which come from road transport (EEA, 2017).

Directive 2003/59/EC of the European Parliament and of the Council of (July 2003). On the initial qualification and periodic training of drivers of certain road vehicles for the carriage of goods or passengers. https://eur-lex.europa.eu/legal-content/EN/ALL/?uri=CELEX%3A32003L0059

Directive 2014/45/EU of the European Parliament and of the Council of (April 2014) on periodic roadworthiness tests for motor vehicles and their trailers. https://eur-lex.europa.eu/legal-content/EN/TXT/?uri=celex%3A32014L0045

Directive 2014/47/EU of the European Parliament and of the Council of (April 2014) on the technical roadside inspection of roadworthiness of commercial vehicles circulating in the Union. Brussels. https://eur-lex.europa.eu/eli/dir/2014/47/oj

EU, UNECE, EuroMed RRU (March 2016). “Food security for transport” Road Map for accession to and implementation of the “Agreement on the international carriage of perishable foodstuffs and on the special equipment to be used for such carriage (ATP)”. Geneva and Brussels. http://www.unece.org/trans/areas-of-work/transport-of-perishable-foodstuffs/road-map-for-accession-and-implementation-of-atp.html

EU, UNECE, EuroMed TSP (June 2019). For Safer and Cleaner Vehicles-Road Maps for accession to and implementation of the UN 1958 and 1997 Agreements. Geneva and Brussels. http://www.unece.org/trans/main/wp29/roadmap_accession_implementation.html

Regulation (EC) No 1071/2009 of the European Parliament and of the Council of (October 2009). Establishing common rules concerning the conditions to be complied with to pursue the occupation of road transport operator. https://eur-lex.europa.eu/legal-content/EN/ALL/?uri=CELEX%3A32009R1071

Subscribe
Marco Ricceri – The impact of the new global regionalism on production,...

Michaël Tanchum – COVID-19 and the Scramble for Trans-Mediterranean Commercial...
Scroll to top