The transport and logistics sector has demonstrated a great capacity for innovation in order to adapt to the changing needs of consumers and the industrial sector. In the 1980s new capabilities were created for just-in-time manufacturing, in the 1990s new technologies were adopted to deal with e- ecommerce and in 2000 for globalization. After 2015 new adjustments were required to respond to Re-Shoring and Near-Shoring and 2020 brought the impact of COVID-19.

This is why Transport and Logistics sector has a proven track record of adopting new technologies, such as ERP, RFID, collective planning (CPFR), process automation and digitization, which have required the development of expensive digital infrastructures

We are now facing a new wave of key technologies, of great impact, implementable at low cost, and with democratizing effects, as:

In the following articles, we address these key technologies, such as Artificial Intelligence, Internet-Industrial-of-Things, Advanced Robotics, as well as Autonomous Vehicles, New Interfaces, Digital Platforms and BlockChain, with the objective of separating hype from reality, in order to describe them, analyse its maturity and adoption, as well as its current and potential impact and applications in large and small companies, as well as in leading countries and developing countries.

Today there is a there is an almost a perfect storm of positive factors, which makes very likely that these key technologies will have a major impact on productivity and the creation of new capabilities and services.   Key technologies take advantage of the efforts, changes and investments made around the world during the already finished digital revolution and do not require new investment in technological infrastructure, since they either use the ones already built or use the new digital platforms.

These key technologies increase productivity and profits, as has already been proven during their deployment in the industrial sector. To the point that they address and reverse the perplexing lack of incremental productivity generated by the previous digitalization efforts, known as the Solow Paradox or Productivity Paradox.

Integration and Mutual Leverage Among Technologies

These technologies they are based on the integration and mutual leverage of existing technologies and allow for a progressive and scalable deployment.  Moreover, their use does not require a solid pre-existing industrial and infrastructural base, making them accessible to all kind of countries and providing an opportunity to narrow the disparity among them.

For these reasons, this new Key Technologies are being rapidly adopted and are already generating significant benefits. The speed, scope, and systems impact of current breakthroughs currently underway, particularly in the manufacturing sector, have no historical precedent and are evolving at an exponential rather than a linear pace. Moreover, the breadth and depth of these changes reveals the transformation of entire systems of production, management, and governance almost in every industry and country.

The speed, scope and impact of the advancements currently underway are unprecedented in history and are evolving at an exponential rate, rather than a linear one particularly in the manufacturing sector. Furthermore, the breadth and depth of these changes reveals the transformation of entire production, management and governance systems, in almost all industries and countries.

Additionally, they already have been tested extensively in manufacturing with important effects to the point of being denominated Manufacturing 4.0 or, the 4th Industrial Revolution. All the Key Technologies analysed here have already been successfully deployed on a large scale, and the industrial companies that have been Early Adopters are already enjoying significant increases in productivity and, as a result, are scaling-up their deployment to consolidate the competitive advantage achieved.

Key Technologies, Maturity and Adoption in Transport and Logistics

Key Technologies have different degrees of technological maturity and user adoption. The following  diagram (2) shows their maturity and adoption in the developed countries for Freight Transport and Logistics. As this new technological wave is based on their integration and mutual leverage, the technical development is happening at much faster pace (5-10 years) than the previous Digital Revolution that took 30 years. 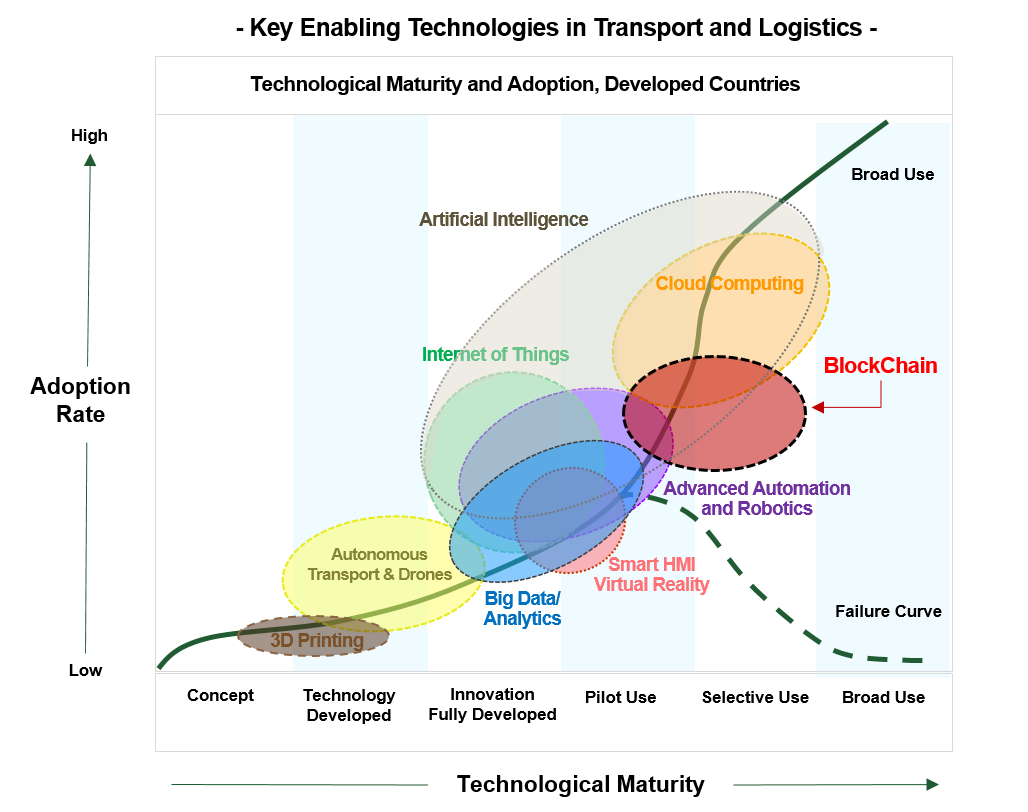 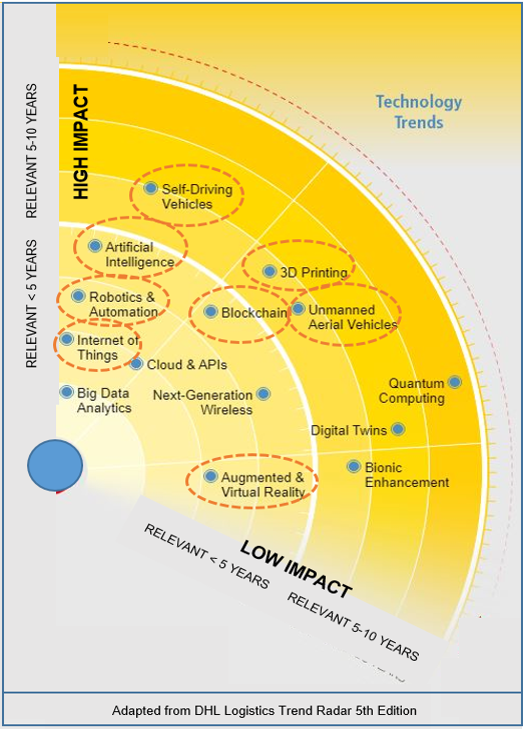 Key Technologies in Transport and Logistics, Effects on Country Disparity

Once that said, as indicated previously, Key Technologies  allow for Collaborative Economy and new de-centralized business models. They also require less infrastructure than previous technological changes, which may favour their adoption and application to new countries where there is limited industrial and infrastructure base, where they can be even adjusted to new uses based on each country capabilities and needs.

Key Technologies like Artificial Intelligence, Industrial Internet of Things, Drones, Interfaces, Additive Manufacturing and BlockChain do not require greater investment in technological infrastructure, since they are accessible on demand, through digital platforms, which favours the application in countries with limited industrial base and infrastructure. Likewise, they facilitate the collaborative economy and new decentralized business models

Indeed, these technologies provide the capacity to allow developing countries to skip and leapfrog technologies without the requirements of a traditional industry infrastructure, much on the way as mobile telephony made unnecessary landlines and allowed for cheap and widespread communications and internet access across Africa. Communications that allowed new business models and economic development.

Industrial 3D Printing offers intriguing possibilities of production without large manufacturing installations, and already exist specialized companies in Morocco, Tunis and Egypt among other countries. Drones can make up for the chronical lack of traditional transport infrastructures, and already exist specialized providers in Morocco, Tunis and Nigeria for example. BlockChain with its inherent transparency, has the ability to facilitate safer, reliable transactions in situations where until now has not been possible, thus facilitating, trade, growth and development.

As a matter of illustration matter the table above , about the previous Digital Revolution raises some intriguing questions about country innovation readiness. We have used the 2017 diagram as it is the best in showing the technological readiness in itself, because the posterior 2020 analysis available already includes the distortions produced by COVID19.

Many countries with limited resources have demonstrated an unexpected ability to adopt and apply new technologies. As a matter of illustration the table above about adoption of the previous Digital Revolution (3), raises some intriguing questions about country innovation readiness. We have used data from 2017 data instead of 2020 (4) , as this last one already shows the distortions produced by COVID19. 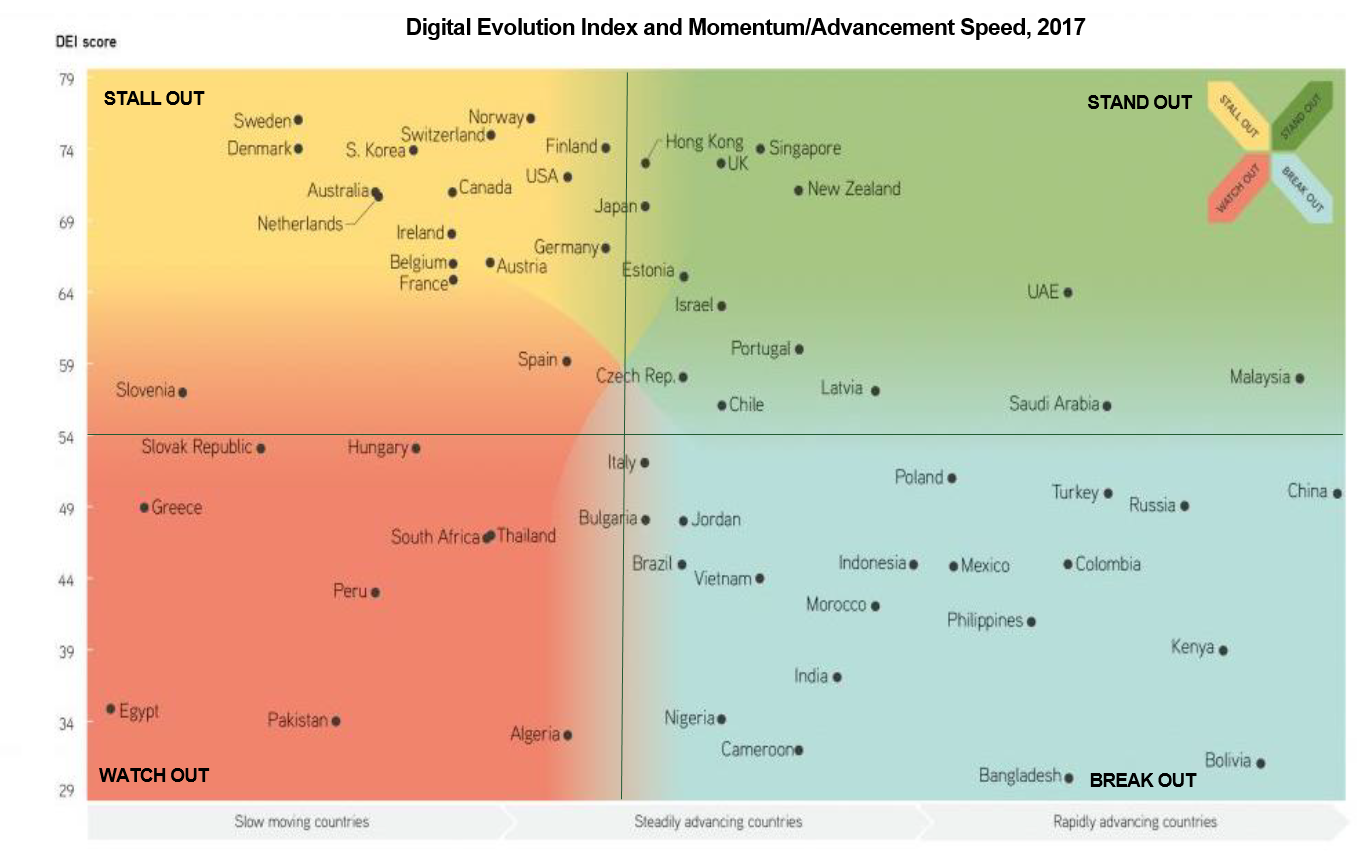