IoT is a commonly underestimated technology. There is a widespread misunderstanding of the real usefulness of this technology, largely due to its flawed initial application in home automation. This has obscured the fact that the industrial and environmental applications of IoT have been essential for the digitization of the physical world and that its current range of functionality and economic impact in all productive sectors including transport and logistics, is, pliantly put, huge.

Internet of Things is a form of distributed computing based on networks of devices embedded with sensors and interconnected by internet.  Each device contains sensors, actuators, and software to measure physical parameters plus internet connection, with the objective of connecting with other devices and exchanging data – to either mutually help each device to better accomplish its individual task by receiving more physical information or, by accomplishing a combined task together.

The term was created in 1999 by Kevin Ashton in a presentation at M.I.T. Is initial application being RFID tags (Radio Frequency Identification) followed by in home appliances like smart TVs, wearable technology, and above all in domotics; interconnecting appliances like lighting fixtures, thermostats, home security systems and cameras.

The present applications of this technology is totally different. Currently IoT is oriented to productive sectors and is experiencing a rapid evolution, with new capabilities, more complex sensors at lower cost and greater integration with other technologies such as Robotics, Big Data, Digital Platforms and AI. to the point that it is considered one of the pillars of the 4th Industrial Revolution.

IoT is one of the rare cases in which surrounding hype has indeed understated its real full potential.  IoT has helped enormously in the previous Digital Revolution by facilitating the digitalisation of the physical world. The innovation capacity of IoT has increased and is currently being integrated with other technologies, such as Robotics, Big Data Analytics and AI. It allows for such a huge of applications, to the point that it is considered one of the pillars of the so called 4th Industrial Revolution.

Industrial Internet of Things (IIoT) refers to the use of IoT initially in industrial production and by extension to any sector. IIoT focuses on the networking of machines to achieve seamless process chains by leveraging and integrating Key Technologies like AI, BigData Analytics and Robotics.

Low cost, miniaturised sensors, actuators, and intelligent devices collect physical and chemical parameters, such as temperature, humidity, amount of light, gases, and data related to predictive maintenance and energy efficiency and they are of general application in monitoring of machines, and installations. An actuator is a device, that in order to automate a process, is capable of transforming energy into an action, like relays to cut off electrical current, indicator lights and solenoid valves. Devices with sensors and actuators interconnected over the internet are nowadays of general application in the monitoring and predictive maintenance of machines, installations, transport fleets, mining and large agricultural plantations.

The data collected by sensors and actuators is sent seamlessly to cloud servers within Digital Platforms that also house IIoT systems often powered by A.I.

The building blocks of an IIoT system are specialised tiered applications, generally located and managed by powerful cloud, based IoT Platforms that collect data from myriad of devices’ sensors and actuators. After analysis, it makes the information available to users, operators and also sends instructions back to the original and new devices.

To provide an illustration of the extent of present services provided, there are three tiers of applications: The first tier is Enterprise Operation and Integration applications that monitor the environment, tasks, vehicles, engines engine status etc and integrates the data at enterprise level.

The second layer of applications provide historical analytics based on AI and connection to people, and downstream the information to generate alarms, alerts, rules to conduct processes and changes in those rules. Additionally, there is a third layer of applications to apply the analysed data to improve the devices and sensors drivers and their management.

All these new business capacities are offered by Digital Platforms without the need to invest in expensive systems or increase fixed capital.

Global annual savings generated by IIoT in inventory management, logistics, and overall supply chain is estimated to reach €460 to €700 billion by 2025. (2) 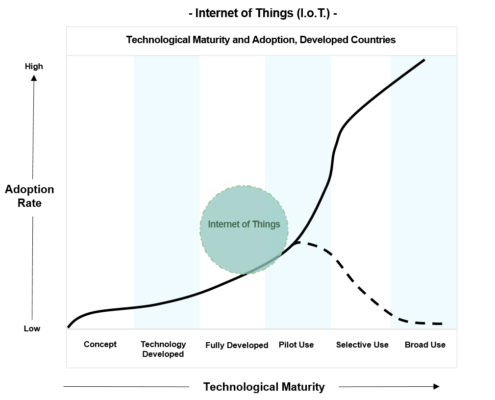 For all these above, the adoption and deployment of IIoT is growing rapidly in the transport and logistics sector. DLH estimates the general adoption and deployment of this technology with a high economic impact will happen within 3-5 years, faster than Robotics and Automation and AI (4). Additionally, IIoT component manufacturers and Digital Platform providers like Microsoft, IBM, Oracle, SAP, and Hitachi continue to consolidate and expand their offerings.

IIoT adoption does not require large prior infrastructure nor multi-year investments, its deployment is scalable   because most of its management is completely outsourced. This provides IIoT with a large potential to level the competitive and disparity playfield among countries.

IIoT has a clear application in developing countries to bypass present limitations in productive and transport infrastructure, while providing new capabilities in, for example, fleet management, urban management, agricultural operations and monitoring of isolated areas.

IIoT Systems provided by Distributed Computing in the Cloud, (Cloud Computing, CC,) collects, integrates and analyses the enormous amount of data provided by sensors and actuators. This allows the collection and analysis of a multitude of operational and environmental parameters, and automated or semi-automated decision making, generating a wide range of effects and applications.

Planning Quality is significantly increased by having multiple additional inputs. Planning is more precise, detailed, and better adjusted to reality. As a result, the delta between Planning and operation is reduced.

Increased Efficiency in Storage and Cargo Operations: Today there are already fully automated warehouses and most companies and operators already use IoT in some function, such as temperature control and security. IoT in conjunction with robotics and device automation, generates a direct effect in reducing costs and in increasing all efficiency metrics.

Cargo and Item Real Time Location and with complementary information like, temperature, humidity, security control, replacement of containers) that permits more effective control of the goods in need of particular treatment.

Uninterrupted Traceability Throughout the Logistics Process: the data collected by IoT enabled devices makes it easy to automatically plot and analyse a multitude of performance indicators. With this information, Digital Platforms equipped with AI are able to integrate the data and offer a Dashboard with an integrated image of the situation of the operations and of the entire company thus facilitating a better understanding of Enterprise situation plus enhanced decision making.

Increased Efficiency in Operations Management in the areas of fleet management, service, and maintenance, in a similar way to the case of Freight Transport.

Planning Quality is Significantly Increased by having multiple additional inputs. Planning is more precise, detailed, and better adjusted to reality. As a result, the delta between Planning and operation is reduced

Service Delivery Enhanced Planning: New capabilities in planning and operations management of the Services offered, achieved through monitoring, analysis and rapid response to changes in operational and environmental parameters.

Traceability Throughout the Supply Process:  in a similar way to the case of Freight Transport.

Traceability and Transparency of Service Delivery and Traveller Management: units equipped with IoT facilitate the control and management of the flow of users, route and schedule adjustments and the monitoring of travel conditions.