Automation and Robotics have been part of manufacturing and logistics for decades, delivering efficient operations, better quality products and generating proved value to the organizations that adopted them. Their design has been evolving continuously, broadening the range of types and capabilities that can develop.

Like the rest of the technologies of the Industrial Revolution 4.0, Automation and Robotics have advanced dramatically in the last decade leveraging and integrating other technologies, in particular Internet-of-Things (IoT) and AI.

Automation is the process of using physical machines and computer software to carry out tasks which would otherwise be done by human workers. In other words, it is the replacement of repetitive tasks and transactional processes conducted originally by humans by automatic mechanisms managed by IT Systems. This replacement usually results in an improvement in efficiency, and reallocation of human resources workload ideally towards more value-added tasks.

There are many types of automation, ranging from the fully mechanical to the fully digital, from the very simple to the enormously complex, with and without Robotics. The most widely used automation typology establishes three types depending on the range of tasks they can perform without reprogramming; Fixed, Programmable and Flexible Automation.

Fixed Automation Involves the deployment of a specific device or machine to automate some relatively simple operational sequence of tasks and assembly operations. It often involves repetitive movement and physical manipulation. This improves productivity while decreasing costs. Fixed Automation has a main limitation: it only allows for the repetition of the same set of tasks and only producing identical outputs, the fore the same machine cannot be used for variations of even very similar tasks.

Programmable Automation allows for reprogramming of the machine by engineers or users, so the machine can conduct variations of the same or very similar task, for example, adjusting for the next batch of production. The advantage is greater flexibility, so the machine can be used for similar other tasks without the cost involved in purchasing additional machines.

Its use provides automated machines with further flexibility, and the capacity to rapidly change among already programmed sequences, like production design variations. Flexible Automation supports production of a wide range of outputs with negligible downtime and high production rate. Because there is no need for reprogramming, machines can easily switch between sets of programmed tasks allowing Batch-Production and also On-Demand Production.

Robotics is the field of knowledge that integrates computer science and engineering to design and build Robots. It can also be defined as the process of designing, creating and using robots to perform a certain task. Robots, based on programmable Automation, are machines capable of conducting actions autonomously, or quasi-autonomously. Robots go way beyond mere automation as they are autonomous within the limitation of the set of tasks they are designed for, and more importantly, Robots interact with the physical world via sensors and actuators and are able to adjust to the execution of their task.

The term Industrial Automation is used to refer to the most common application of robotics; the use of robots to perform physical tasks autonomously within an industrial process, as is the case of their use in automobile assembly factories. A further technological step, Robotic Process Automation, allows software robots to use an application’s user interface (UI) to mimic human actions, without modifying systems or requiring human intervention. This approach is effective for automating rule-based tasks applied on structured digital data, such as sorting items.

The most advanced AI-guided robotics is experiencing a rapid adoption and deployment due to a combination of three factors. First, advances in AI and its better integration allow an increase of the complexity and variety of functions that robots are capable of performing autonomously.

Secondly, the cost of Robots is decreasing consciously. Indeed, the average robot price has halved (1) over the past 30 years, in large part because robot manufactures are responding to increasing demand from emerging countries by increasing production volumes, achieving larger economies of scale and transferring the cost reductions into further price reductions. Thirdly, it should be noted that the majority of companies in the industrial sector and a good part of the logistics one already have a long and profitable track record using robots.

As the cost and complexity of automating tasks with robot’s decreases, we can expect an increase in its adoption and deployment by companies, operators and authorities in transport and logistics. 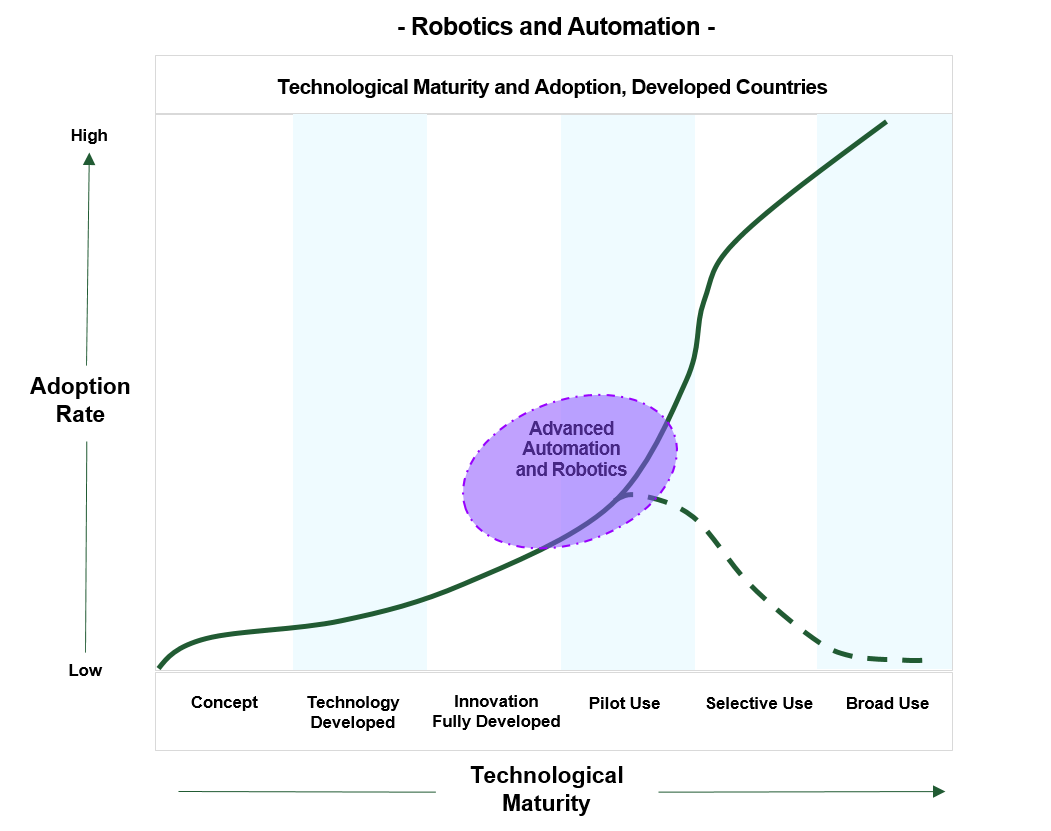 These elements support a strong case for a fast and extensive adoption of AI powered Automation and Robotics in most of the economic sectors, and in particular in logistics. It is estimated that the time required for a fully general adoption is less than 5 years.  Indeed, companies and operators that were early adopters and fast followers are already reaping the benefits.

Therefore, we can conclude that those who are not already exploring its use or at least considering it are taking not only the risk of wasting an opportunity for corporate and social wealth generation but also of losing competitiveness within an estimated period of five years.

ROBOTICS AND AUTOMATION EFFECTS ON TRANSPORT

This technology has been part of manufacturing for decades. Now the falling prices, increasing demand from developing countries and mid-size operators, plus the integration of AI through Cloud Computing is further expanding its applications and uses.

New Staff Skills Required: one of the effects of Automation is the realignment of labour dedicated to transacional operations, into personnel dedicated to the supervision, maintenance, development and design of the product.

Process Efficiency Gains:  Automation, improves efficiency in the execution of processes related to planning (e.g. service design), operations, business aspects, and support and demand issues. This frees staff from mechanical work and gives them more capacity to respond to other types of tasks. It also means improving efficiency (reducing costs and increasing passengers).