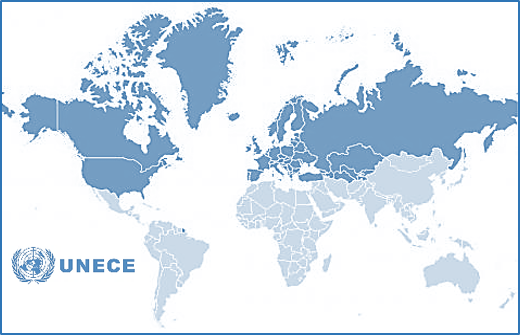 The United Nations Economic Commission for Europe, (UNECE), is the Geneva based, U.N. Regional Commission responsible for coordinating the economic and social areas of the U.N. covering 56 European, North American and North and Central Asian countries.

UNECE has a leading role in generating economic, social and environmental sustainable development, and in identifying emerging challenges and promoting innovation in the region.

UNECE offers analysis, advice, recommendations and coordination to member countries and the United Nations system, while providing a forum for policy formulation and a platform for high-level engagement among member states, international financial institutions, the private sector, and civil society on global trends, policies and actions.

U.N. AND THE CREATION OF CETMO

CETMO has been linked to the U.N. since its inception. CETMO was created as a result of the Thessaloniki Conference held by UNECE in cooperation with the UN Regional Committees of Africa (UNECA) and East Asia (ESCWA) to address the specific transport problems facing the Mediterranean Region. It was then decided to promote and support the creation of specialised organisations dedicated to generating transport and logistics knowledge, cooperation facilitation and harmonised solutions, specific to the Mediterranean region.

Consequently, CETMO was created in 1988 as an U.N. associated organisation with Permanent Observer Status. Additionally, CETMO and UNECE signed a Memorandum of Understanding in 2018 to strengthen their cooperation.

CETMO has since then actively participated in the Inland Transport Committee (ITC) , the experts and transport ministers Working Group on Transport Trends and Economics (WP5) and other task groups with, for example a leading role in the analysis and concept design of the France-Spain-Maghreb transport corridor.  Additionally, while CETMO’s initial mandate was circumscribed to the Western part of the Mediterranean, the lack of any similar transport and logistics specialised organisation in Eastern Mediterranean lead its work being spread to the Mediterranean region overall.

The close links to UNECE allows CETMO to have and expanded knowledge of trends, proposed policies and global challenges, as well as access to U.N. international Cooperation Framework and initiatives. This allows us to leverage the resources and information of the UN Regional Committees of Africa (UNECA) and East Asia (ESCWA).